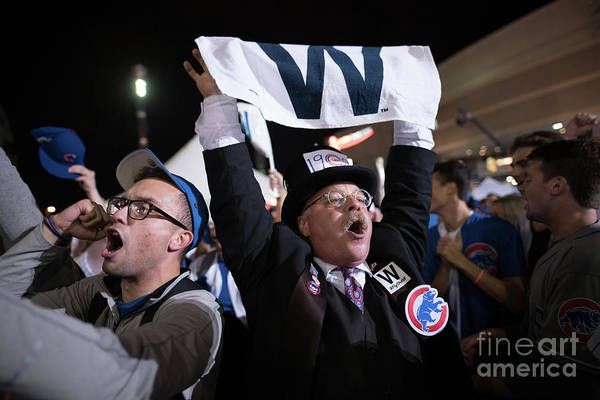 Cleveland Indians Fans Gather To The by Justin Merriman - 8" x 5.5"

Cleveland Indians Fans Gather To The art print by Justin Merriman.   Our art prints are produced on acid-free papers using archival inks to guarantee that they last a lifetime without fading or loss of color. All art prints include a 1" white border around the image to allow for future framing and matting, if desired.

CLEVELAND, OH - NOVEMBER 03: Joe Wiegand of Colorado Springs, Colo., a Theodore Roosevelt impersonator and self-proclaimed Cubs fan, celebrates after the Chicago Cubs defeated the Cleveland Indians in game 7 of the World Series in the early morning hours on November 3, 2016 in Cleveland, Ohio. The Cubs defeated the Indians 8-7 in 10 innings for their first World Series championship in 108 years. (Photo by Justin Merriman/Getty Images)Image provided by Getty Images.